During 9th grade, I seemed to be walking on the wrong path. I was often away from home, going to parties, and so on; my mother noticed this.

Thus, an old friend of mine showed up who told me of the Boy Scouts. He told me that on a Boy Scouts Camp you learn to play with a knife, to build a fire, and to survive in the wild.

So I was really excited and I yelled: “I want to go!” This is how I made one of the most important steps in my life. It was thanks to the Boy Scouts Camp I discovered a completely different world.

The Power of Example

We were really tired after a long day of work. Outside, the rain was pouring and my team took shelter in the warmth of the tent. They were all aged between 14 and 16; they had innocent and incredibly tired faces. Who could possibly have had enough energy to empty the trash? (it had been sitting beside the tent for the past 2 days).

At the mention of a possible 20-meter trip (from the trash next to the tent to our improvised landfill) those innocent faces all hid in their sleeping bags. No one said a word!

Then, the one who was in charge of them, a Toastmaster-to-be, got up, put on his boots, and went to take out the trash. After this, we all went to bed.

A few days later, the situation repeated itself. Key words: tiredness, storm, and trash. I was amazed to see the youngest of the kids get up, put on his boots, and go to take out the trash.

The Secret of Quick Progress

Since I was a child I’ve been organized, I loved making lists (yes, lots of lists), and I always wanted to understand everything. These were the first symptoms of perfectionism, a disease that affects many of us. The problems started to appear early on, when I had a team of 5 kids together with whom I wanted to change the world (or at least the hill where we had set up our tent).

In a Boy Scout team you have to know to make at least 10 knots, to build a table, to set up a tent, to build a fire, and many more things. Obviously, no team knew them all, but competition motivated us to want to win, to want to succeed.

During the first year I strictly controlled my team and had them learn everything. I was by their side, I had a plan, and I thought that, in the end, we would win. I still remember how, on the last day of camp, 8 on the dot, a trumpet suddenly blared. They were gathering everyone, so we had to go too! I hurried everyone and we made it up the hill where the gathering took place.

There, a boy scout had to recite the Boy Scout laws and the “lucky” one to be chosen was my teammate who hadn’t learned them! (He was excused, however, because he could build a fire in the middle of a storm and build a table with no nails).

We lost the competition! 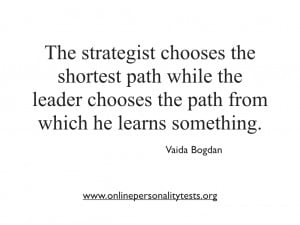 Next year I thought of completely changing our strategy! No more perfect plan that takes us nowhere, let’s try something new! I gathered my team and tried to specialize them! Each member had a certain activity that he mastered! No one could compete with him.

One knew how to build a fire. The cook make delicious meals and the 2 builders were so good at their 15 years of age that they could have easily found a job if they wanted to. The team no longer learned from textbooks, each had the role he wanted and got better and better by learning from all available sources.

Did we win? Of course we did! (On the last morning I pushed my 14 years old teammate in front, to recite the laws of the Boy Scouts … no one would have denied his angelic expression 🙂 … not that the rest of us had any clue what the laws were … no way …)

One of the first things I learned as a team leader is that each member in your team is a part of the success you’re aiming for. If one part isn’t used well, the whole team might lose.

I took this advice to heart and I started a series of teambuilding courses. If one of us woke up in the middle of the night (to go to “the bathroom”), he had to start singing our national anthem. As we all woke up because of his yelling, we also started to yell at the top of our voices. Imagine that! We were on a mountain, in the middle of nowhere, and in the middle of the night we would start yelling like madmen! All the team yelled! Even the hounds from the nearby sheep pen accompanied us by howling!

Those who lived on the nearby hill couldn’t believe their ears and those who were in charge of us came to wake us up, to gather us, and punish us. This was pretty much the routine.

But who was to be punished? We were all looking down at our boots (those of us who had had time to put them on) and no one said a word. My team, united by our little games, didn’t give out. We were sticking with each other, for better or for worse!

Even if this never happened again (okay … maybe one more time), we did other sorts of silly things:

We did many silly things but, thanks to them, I won the heart of my team.

In life there’s no secret way to becoming a leader. An anonymous quote says, “A leader is an ordinary person with an extraordinary will!” If you have a dream, a goal that you want to achieve, don’t let anyone stand in your way. Make the first step and let those who are motivated by your actions follow.

Boy Scouts Camp was the thing that kick-started the passion in my life for the first time. That’s where I cried for the first time and that’s where I got my first stimulus. In life there’s no secret way to becoming a leader. An anonymous quote says, “A leader is an ordinary person with an extraordinary will!” If you have a dream, a goal that you want to achieve, don’t let anyone stand in your way. Make the first step and let those who are motivated by your actions follow.

If the stories here inspire you, share the article using the buttons bellow:

A school boy went to see his teacher to talk about a problem that was troubling him. “Everyone says I am good for nothing” he complained. “No one believes that I will ever achieve everything. They think I am stupid and lazy. How can I become a better person? What do I have to do… END_OF_DOCUMENT_TOKEN_TO_BE_REPLACED