Why is it that some people never pay attention and others talk only about obvious things?

You can find the first article in the series here.

Now you will understand why some people seem dreamy, not paying attention, maybe a bit crazy and others tell you information you already possess, get lost in analysis and can’t see the big picture.

The typology of people you meet in your everyday life.

I met a couple of days ago with an event planner alongside another trainer. She wanted to discuss an event at which I will lecture: how long it would take, what we’ll be talking about, what we’ll need, etc.

The session started out as very structured: she had the timetable in her notebook and we split the number of hours (except brakes and buffer time) in hours per trainer. She showed us the final results: 1’30” per trainer with a break in the middle of the training (Typical S)

The other trainer said that he can do it with or without the break; he can manage it either way. When he was asked what his training will be about, he said that he hasn’t decided yet but he’ll manage; he wants to set up a training in which people come up front and talk, he wants to introduce games, etc. (In other words he had a strong vision but lacked a concrete plan, typical for intuitive people – N)

When it was my turn, a hardcore S, I told her that I had already sent her the content on email (while she was talking to the other trainer), I will end the training in an hour and a half and I will let the students decide whether they want a break or not (I will only take the break if I see that they are tired). I told her that I have the planning for the training, but I’d prefer sending it to her email rather than discuss it now, although if she wanted to, we could discuss it step-by-step (typical S).

(It’s fascinating how training is organized, isn’t it? :))

You can receive/perceive information in two ways:

It’s interesting to see how what S type people think of N type people, and the other way around.

Imagine being in an empty room.

You’re a person that has relied his entire life on his senses.

You don’t make a choice without understanding all of its effects, without studying it properly, looking up reviews on the Internet; you want to know everything. You’re a practical person, who makes lists with the things that you want from life and also lists with your tasks. You’re results oriented.

But there’s someone in the room with you.

You called him and he was around 10 minutes late, unbelievable! You can’t rely on him.

You talk to him and when you get into the issue, he tells you that he got it and tells you to get over it! You think he’s not in his right head and avoid him.

You have no idea what you’ve lost!

Now put yourself in the other person’s head.

You’re in the same empty room.

You’re a person that relied on his intuition his whole life.

Each choice you’ve made, you’ve felt as being the right one. You know that there’s something driving you to make choices, and someone that helps you. When you see a person, you realize if he will play a role in your life or not, and, without any real reason, your thought becomes reality.

But in the same room with you there’s someone else.

You called him there and he arrived earlier.

He says he has a plan, he explains it and he starts to go into specifics, statistics, studies of…but all of this is obvious!!

He has a list of minor tasks which he ticks as he presents it to you…can’t he remember things? All the tasks can be deduced from the project; he didn’t have to take them down!

You ask him the general idea and he goes back to technical data… OK, maybe he didn’t get it. You ask him what the big picture is and he answers that he hasn’t gotten there yet. But you already know what you have to do and you already know this project could work!

This guy is way too short sighted, he’s stuck, he can’t get the big picture, and so you avoid him.

You have no idea what you’ve lost!

Every person is right, but right in its own way. The two typologies function on different types of data. 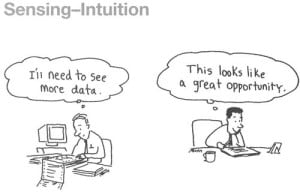 When N sells something to S, it will be harder for him to offer data (because data is obvious) and will try to sell the potential (making S feel uncomfortable)

When S sells something to N, he offers precise data, analysis, statistics, when N would prefer finding out the potential, what he could accomplish with the specific solution.

If you try to sell something to an S oriented person, you’ll have to offer him precise data, concrete benefits, facts/data, results obtained.

If you try to sell something to an N oriented person, you’ll have to give him the overview, what he can do with it, the future.

A senses based person needs proof to act; he gets the motivation on his own.

The intuitive person has to identify itself with the type of person he/she wants to be and will make an intuitive leap towards that specific direction.

When S reads a book, he/she reads it page by page, till the end.

N will browse through the book, will check the content table, will read a chapter that is of interest, will jump to another chapter that provides interest (will connect between information).

The S/N problem is one of communication: you don’t get the information you want.

S is focused on now, on practical information, on facts

N is focused on the future, on potential

Please write below an example from your life (maybe something that happened recently) in which you interacted with a person whose interests opposed yours, N or S, and what you found different on that person.

If I get enough comments under this article, I will provide the third part:

In this article I will show you: how to fit people in the 16 types of personalities ( natural and fast, without marking their characteristics in your mind ) how to use the information attained: in your relations ( you will understand your family, you will know why your best friends are late or disappoint… END_OF_DOCUMENT_TOKEN_TO_BE_REPLACED