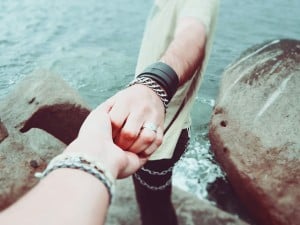 The need to feel close to someone is inherent to any human being, but for some, this is their default way of communicating affection. A “Physical Touch” person needs to feel cherished and secure throughout the day so gestures like a hug, a pat on the back or a kiss on the cheek go a long way!

People usually think about sex when they first hear about this language, but it’s very important to know that it is just one part of the picture. In fact, an individual who seeks physical touch mostly wishes to have his or her hand held or get a massage after a difficult day at work. For them, touching means “I am here with you and for you. You are not alone” and saying it without any tactile comfort will be just like talking to a brick wall.

So, the bottom line is: no words, gift or acts of service will communicate care like gestures will. But what if you grew up in a severe environment and are not used to treating people like giant huggable Teddy bears? While it may be difficult at first, this love language can be learnt. I recommend you talk with your significant other about physical touch that he or she deems appropriate in various settings, because even if your partner speaks “Physical  Touch”, they might feel embarrassed to be touched in public, sometimes. Remember that cultural traditions and religion also play a role in how you manifest affection so be sure to take it into consideration.

Let’s take the following example to see how to really communicate with your partner:

A couple has been married for over 15 years; the wife’s primary love language is Physical Touch and the husband’s is Acts of Service. However, the woman is mother of two twins and has, throughout time, shifted her need for affection to Acts of Service. While the children were small, the couple communicated extremely well because they were speaking the same language: Acts of Service. They would complement each other by doing chores, picking the children up from school and managing other household activities. But time flies for everybody and the twins grew old enough to go away to college, leaving the couple alone in a big house and… with not so much to do anymore.

2 years later, their marriage had almost dissolved. Why? Because they’d forgotten how to communicate to each other. The wife went back to her primary love language which was physical touch but unfortunately for her, she felt she wasn’t getting affection. Thoughts like “I’m not attractive anymore”, “I’ve had 2 kids, how can I be?”, “There’s so much distance between us” or “Look at us, 2 strangers in a house…” etc. spun inside her head. 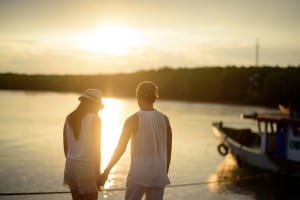 Many times, the mental images we create are far from what reality depicts, and this case was no different. A good thing, though, was that the couple decided to give their marriage another shot and got counsel; there, they identified and learnt about love languages and had an epiphany: Their marriage wasn’t over! They just had to try something else. Love had found a way…

Don’t let their story become yours! Take the test, find out what love language you speak and have an open conversation about it with your partner. Discover, explore, be curious!

For those who are dating, are engaged or married to a “Physical Touch” person, here’s a list of things you can do to get your feelings across:

If you want to find out more about The Five Love Languages and how they can help you in your relationship, you can take a look at my complete training >>> here <<< (the link has a highly discounted coupon attached, for the people that took the test on my site).